Plymouth relies heavily on tourism for its economic well-being. Cycling is becoming more and more popular and cities that have invested in good cycling infrastructure are benefiting.  Plymouth already attracts many leisure cyclists to the Devon Coast to Coast trail, and is firmly on the cycling map as a result of the European Vélodyssey Route passing through.

At a more local level there already exists a large part of a superb coastal route showing off the stunning shoreline and maritime history of the City. This runs roughly from the Torpoint Ferry through Devonport, Mount Wise, Stonehouse, West Hoe, The Hoe, Barbican and Coxside to Laira Bridge. Then there is the old railway trail between Oreston roundabout and Radford Lake. Unfortunately the route ends at this point because there is no bridge crossing Hooe Lake to link into Turnchapel and Mountbatten, where the ferry could be used to complete this major tourist attraction. 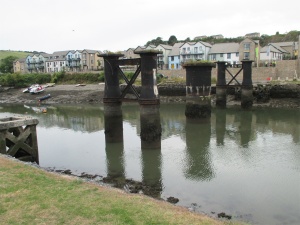 When the housing estate on the site of the old timber yard on the East side of the channel was developed the former railway line was cleared as a pedestrian/cycle path. A gap was left between the new houses to access a pedestrian/cycling bridge which would be constructed on the existing piers of the old railway line. Re-instating the bridge across the entrance channel to Hooe Lake to link Oreston and Turnchapel has been planned for at least 15 years and various PCC administrations have considered repairing the bridge, without action.

Reinstating this bridge is more important than ever. There has been a massive and ongoing development of residential housing in the quarries to the West side of Hooe Lake. This has generated an increase in motor traffic in the Radford area of Plymstock and on the A379 Laira Bridge.

Many cyclists, including children going to school, use the steep, muddy and narrow footpath past the sewage treatment plant to avoid the very busy main road. Completing the cycle path link to the Pomphlett roundabout and the new expressway would provide an almost flat route to the city centre in about 20 minutes, often faster than the same journey by car.

It would also provide a link to NCN27 via Saltram, Plympton, the Plym Valley and beyond. It would enable cyclists to access the watersports industries and leisure facilities on the Mount Batten peninsula and by using the Mountbatten ferry would be the missing link in the Plymouth Coastal Route.